Krug: the only one 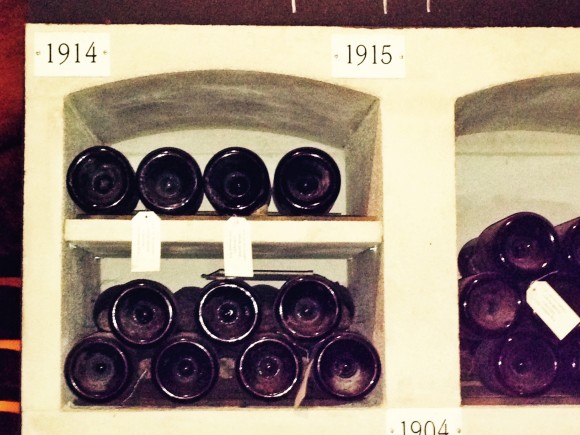 A visit to Krug. Maybe this is a wine travellers’ idea of Champagne heaven. Close. The wines will mesmerise and history rarely paralleled after Joseph Krug’s family efforts at Krug and Co since 1847.

The wine of the company – Krug Grande Cuvee contains a lattice of many wines. Sitting around a table festooned on persian rugs we spy a bottle, the minimum age range inside is 20 years but this one spans from numerous village wines from 1990 through 2006 (25 yo).

So the blend was tiraged (yeast added) in 2006 and lees aged until a 2013 disgorging-7 years dead yeast time.

And many vintages are stored in the chalk to make these Grande Cuvees – at present there are 400.

Back vintages were once held in magnums (as Bollinger still do); but from the 1960’s that stopped and stainless steel is preferred.

What varieties? The three main ones grown in the champagne appellation – pinot noir, chardonnay and pinot meunier are here; this bottle’s proportions were 44/33/21 in that order.

Krug Grande Cuvee NV AUD 250, 12%; always has bold colour (but so would any contributing white wine stored over 20 years); nose of power, scents of delicacy, broiche, not buttery but veins of sweets and roasted nuts, elegance from oak presence.

That’s just the aromas which will dictate a huge taste expectation. Creaming bubbles because the aged wines are so nut-like, power in the palate, dryness from oak-space and age accumulation. What a mix. A venerable powerhouse of flavour. Wine in a mouthful.

We tasted a second Krug Grande Cuvee NV, disgorged in 2012 but composed in 2003. This wine is chardonnay dominant from 120 wines, the oldest being 1988. From this tasting I am deducing that Krug do not make an annual cuvee blend but have another cycle of blending which is a house habit.

What is it in the anatomy of making Krug? Not one aspect but several; some very old base wines, strong use of pinot meunier, old barrel use and more.

Since 1964 at vintage ferments are in 4000 old barrels, and these are maintained in a fresh but old state year on year. So the base wines have that unmistakable Krug stamp of conditioned oak character, more subtle than obvious.

While Krug focuses on its spotless non vintage for the majority of its drinkers, equally memorable are its vintage bottlings.

The Krug 2003 AUD 350, 12% is a heavenly wine; vintage Krug has little resemblance to is blended non-vintage; so the year is on show as are the various parcels (46/29/25) selected to be an ambassador for the year (after 8-9 years in bottle). Has probably 30-40 village components, quite a masterpiece, the fermentation in barrels decidedly give it “Krug” character from oak seasoning aromas and taste. Lovely wine; full-bodied vintage, though never as full as Grande Cuvee.

And if you like music to contemplate while the Grande Cuvee is penetrating your mind and palate, try this: