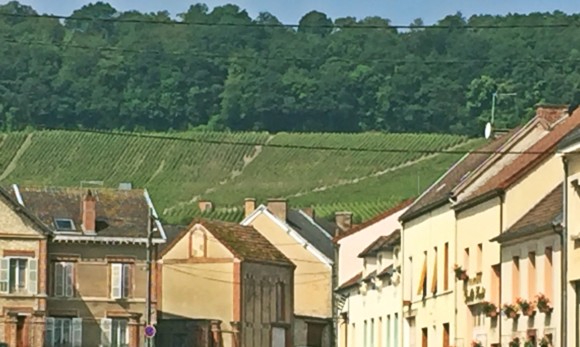 Champagne is a terrific wine sparkling region, now UNESCO-listed. There are so many bubble makers.

And Uncorked’s mission for travellers is to visit a clutch of houses of bubbles, take happy groups into very dark and cold places, then emerge into sunlight to drink the fizz they make.

Some are corporate makers (think Louis Vuitton Moet Hennessy-LVMH), some are collectives (Tresors) and the rest are private family businesses. All types comprise Champagne and there are many tastes.

The cultural side of this writer says Champagne drinkers need to appreciate all offers from all houses (if there is time to taste everything); or better still visit Champagne for some structured indulgence and first-hand plays.

Champagne bubbles are great levellers. Of course it is the national drink in cities like Reims or Epernay, and again in the quaint flower-box lined villages like Verzenay and Vertus.

And these collections of picture-perfect stone cottage aggregations are dotted all over the Champagne landscape. The production around each village is defined in the appellation, by its boundaries (just like a shire or city boundary). One is called Chouilly.

Champagne has 33,000 hectares of grapes in the Champagne-Ardennes prefecture, selling 315 million bottles a year. As regions go, only Languedoc and Bordeaux sell more bottles.

So there is an appellation of Chouilly which is defined as grand cru for grower payment purposes (sold grapes); this village produces mainly chardonnay.

There are entities who buy grapes (negociant brands) because they grow too little, those who sell grapes (growers) to negociants and those who make Champagne from just the grapes they grow (grower brands). The small and the large.

Veuve Clicquot is large, Veuve Fourny is small. Both make different wine. (Veuve is French for widow by the way).

Veuve Clicquot in Reims presented their standard drop, Yellow Label Brut NV, with a label colour you cannot miss, so bright it is in one’s face. And it was impossible to resist the more elite La Grande Dame 2008 (contains 8 grand cru villages), lovely, lithe, memorable.

On the Avenue de Champagne in Epernay, at Pol Roger’s most drinkable address, poured were two of the now-saluted 2008 harvest wines, Blanc de Blancs and Rose, both definingly different, delicious, deep and positively enchanting to the mouth. Rose has body.

Nearby in Ay, after touring the underground tunnels that store reserve wines in magnum size quantities, Sonia de la Giraudiere from Bollinger poured two glorious vintages, 2005 and 2002 which epitomise oxidative-style base wine fermentations in old barrels, the  Grande Annee and then RD (recently disgorged or older vintage yeast removed and sold later).

At Ludes, which is in the countryside on the Montagne de Reims, Canard-Duchene’s Aurelie Lelarge chose the clever Cuvee Leone Green Brut NV, a responsible organic fizz with creaminess, delicacy and streams of nice fresh brulee yeast characters. Yum. The Leone range is exciting.

Back in Reims it was time to visit one of the five houses with Gallo-Roman excavations, made as deep as 30 metres around 200 AD into the mountain of chalk which sits within the city.

These crayeres have a peculiar shape due to the special engineering feats of the Romans, now adopted by Champagne makers such as Charles Heidsieck post the French Revolution to store champagne. The natural temperature of 9-10 oC slowly matures the wines.

Dominique Cima-Sander presented Charles Heidsieck 2006 twice, at a pre-lunch tasting, then with a plate choice of crevettes, potato, fresh asparagus and orange sauce. The wine has good spine but now also a roundness to make it fine drinking today, and a good recollection of the year in Heidsieck’s vineyards.

Sebastian at Krug presented the 2016 release of Krug 2002, which came alongside the much-discussed Krug 2003, with a truly hip blackboard menu displaying the Krug identity code of each bottle. Wines are outstanding, deep, different, powerful, masterful, both long livers.

Christine Tellier of Taittinger took travellers into the once historic Reims Church-owned crayeres to view the famous company blanc de blancs aging on lees in all sizes from 375 ml to 15 litre. Later pouring Comtes de Champagne 2006, personified in its elegance, always a poised wine, white flowers, with delicacy and freshness. Wine to love. Never miss tasting this.

Start the voyage, never miss the opportunity. This was the writer’s 16th visit, twice as Vin de Champagne Laureate, 1985 and 2014.

Veuve Fourny: a champagne of the moment

The brothers Fourny-Charles and Emmanuel were in town this week. And what an impression they make as grower Champagne makers. There is passion in every word they speak about their champagnes-the personalised stuff. They come from Vertus, a chardonnay growing town at the very south of the region -les Cotes des Blancs which dominates chardonnay plantings in the Champagne region.

Charles tells me his forebears started the brand in 1856. But now, as his dad Roger is no longer around, and his mum is responsible for the business, Veuve (widow) is a good name as many houses before have done.

What is the champagne of the house? Veuve Fourny Blanc de Blancs Brut Vertus Premier Cru (AUD 54) which is non vintage chardonnay really. In a very big way, this is how I judge the quality of the house-by it’s standard non vintage-which incidentally takes a lot to put together by Emmanuel, as I heard from his description.

The company owns 30 plots which act as small vineyards, and annually harvests these as 60 parcels of grapes to meticulously separate and evaluate the base wine results.

This is the small grower mentality whereas a big maker like Veuve Clicquot in Reims would put all the Vertus origin premier cru chardonnay grapes in one big tank-call it Vertus. The separate qualities, or the ability to recognise great portions of any vineyard, are lost.

Where this process of retention of small batches comes into its own is because Veuve Fourny have accumulated lots of old oak barrels, so portions as small as 300 litres can be kept aside for blending into higher quality cuvees (blends).

It goes further than that. Often people from one French region never visit another adjacent one, however close, ever in their lives. In the case of the Fournys, one nearby region is Burgundy.

Emmanuel regularly visits colleagues in the chardonnay-producing part of the region during vintage for information sharing, and that now reflects in his winemaking, particularly in his more natural rather than clinical ways of not filtering some lines yet avoiding some of the nasties which can develop from ignorant natural winemaking.

The second wine which pairs with the Blanc de Blancs is Grand Reserve Brut Vertus Premier Cru NV (AUD 54) which is Pinot Noir and Chardonnay; having a high addition of reserve wine (30% from 2008) whereas the current wine is based on the 2009 harvest.

Emmanuel’s trips to the white burgundy areas which work specifically with chardonnay clearly reflects in his winemaking. This is significant, to see champagne chardonnay and white burgundy mindsets working in the same cellar at making more interesting Blanc de Blancs champagne.

This activity also contributed to Emmanuel being named best “Young Winemaker in Champagne” from a popular local vote for 2012.

But that is the edge which grower Champagne makers need-to separate them moreso from the big brands which take away vineyard origin by massive blending. Note also that Veuve Fourny do not use pinot meunier-the most widely planted champagne base wine variety in the region.

What we also drank:

Veuve Fourny Cuvee R Extra Brut (AUD 70)- a tribute to the brothers’ dad Roger; based on 2008 vintage wine, and made very intensely, having an amazing nose of yeast and funky yeast adjuncts (additional nose interest); then a great line of acidity, lively and taut. Low sugar at 4 grams per litre.

Veuve Fourny is a leading grower Champagne maker of chardonnay bubbles. Look out for them; or other brands which lead this charge-Agrapart (Avize-chardonnay), Larmandier-Bernier (Vertus and other chardonnay villages) and Egly-Ouriet (Ambonnay-pinot territory).