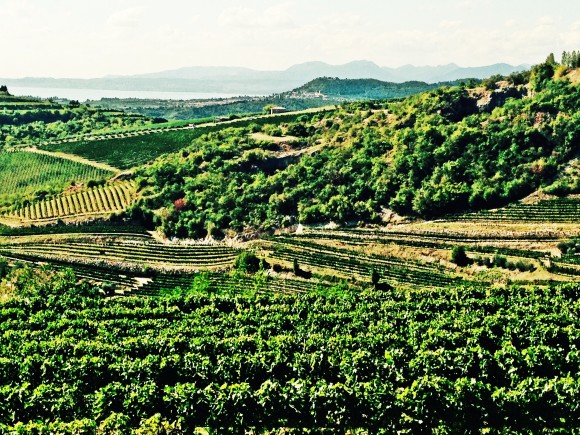 This might sound ridiculous but since the late 50s the good Valpolicella folk in one of Veneto’s wine capitals, have called these wines from dried grapes amarone.

And they are not a new idea, in fact it was a Roman trait to make their wines from shrivelled bunches (called appassimento) BC.

My lovely host Annachiara Zanoni pointed out these Valpolicella Classico Superiore vines face the modifying effects of the nearby Lake Garda, fed by three local rivers, the Negrar, Fumane and Marano.

I was lucky to visit at Masi in the middle of harvest of their three indigeneous red grapes; corvina, rondinella and molinara; where enthusiastic cutters were placing only the best bunches on small fresh white pine trays.

Afterwards they emerged into one of the 15 company drying towers which have hand-spread bunches on large bamboo trays to dry for 100-120 days (DOCG rule) in environments which emphasise a full red berry to concentrate to a withered, less-juicy, more flavoured little wine morsel.

This was fantastic to see happening as I slipped on the sugary floors watching a careful sorting bunch by bunch of glossy, sun-dusted, dizzy-ripened corvina placed on these flat and worn Masi-branded trays.

In the drying these grapes grow in dimension; wine colour which results goes deeper, the high sugars and partial noble rot attack on the thinner-skinned corvina (up to 40%) cause the yeast to make glycerine, a smoothing texture agent so the wine slips on your throat.

However these wines are created very carefully, spending 24 months in big barrels (600 litre or fusto veronese) which do not give additional oak notes to a chocolate-coated wine brimming with sweet spice and deep baked plum  tarts.

Now I wish I could drink all Masi’s amarones together, forget the fresh and dry, keep the deep and flavourful; three single vineyard ones; Vaio Aramon (cherry wood aged also), Campolongo and Mazzano; or the beautiful Costasera (straight up or its Riserva) which are more widely blended.