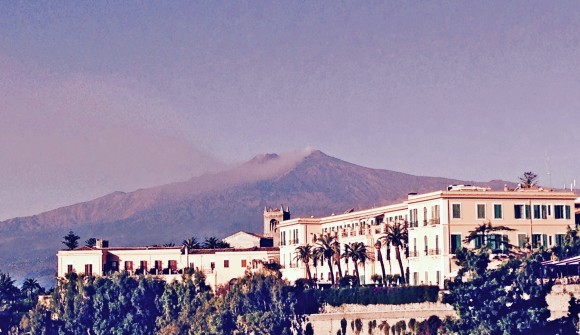 Uncorked guests just love the Etna grape story. How the Benanti family with roots in Lombardy migrated to Sicily by royal decree, to Catania really, assisting the economic output of eastern Sicily.

By the 1800s native red vines were well established, named in Sicilian dialect but with no relatives in Piedmont to nebbiolo, barbera or dolcetto which inhabit the homeland slopes there. But the wines have similarities.

Travellers come in contact, in a warming manner, with the major variety, nerello mascalese,  Etna hero and gem of a variety. It is lithe, with some pinot noir textures, having pale and some browning colours as with the varieties in Piedmont, then a broadening mouth appeal.

I asked about the origins of nerello mascalese. Host Antonio Benanti says “it has origins in the old town of Mascali nearby, nerello means pale black in Sicilian dialect, and as it is trained by the albarello system introduced by the Greeks, it is an ancient Etna native. We really never know its exact origin”.

Albarello is a form of bush or free standing vine, where the vine supports itself. In old times the vines were randomly planted looking like unkept bushes while today the albarello vine is a tall, upright, row-planted and cleverly-grown shrub whose growing shoots are renewed annually.

And of course a smoking Mount Etna supervises the annual growing crop with a periodic black spray of lava ash. And the rain washes it off. The soil is very mineralised.

The original winery or palmento, is one of numerous ancient designer facilities scattered over Sicily. Lava stone wineries became as a cultural and business interest since the late 1700s.

The rejuvenation of the Mount Etna vineyard sites has seen a purchasing of these derelect palmentos for incorporation in the new wineries as historic parts, with use for wine making illegal (unsanitary) or uneconomic to re-build. But they make great aging cellars or show pieces.

I have visited similar wineries at Passopisciaro and Tenuta de Fessina.

The old vineyards were mixed in plantings and now on trend as a “field blend”. The locals say that their grandfathers must have known what is best for the final wine as nerello mascalese dominated though 20 per cent is nerello cappuccio, and 1-2 per cent the local white variety minnella. Minnella is no longer used.

Second wine in the pair is Benanti Nerello Cappuccio 2012 Etna Rosso DOC, AUD 65, very pale, usually unoaked to keep the softness, and very much akin to the light or soft reds of other regions; or also allowed to be blended with nerello mascalese in the field blend.

Uncorked guests taste the magnificence of the volcanic nerellos under the puffs of Etna’s occasional smoke. And view the vista of Etna up closer below!