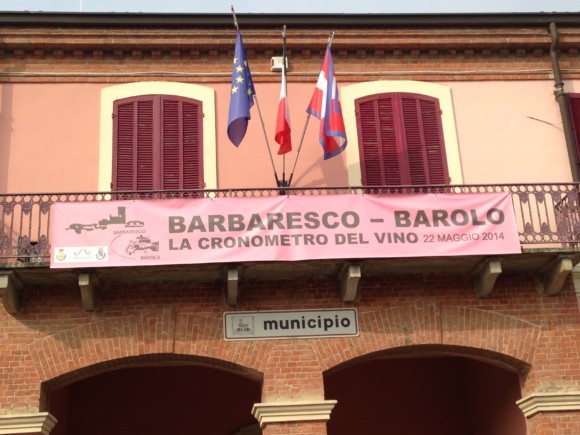 Nebbiolo (CN): You can join the club

This is a piece of nebbiolo heaven. As this black, blushed, hard-skinned, slightly elliptical grape makes wines which assail the palate, yet when you “get it”, open a new range of flavours and textural sensations to wine drinkers.

This is the experience of my wine tour group. The enlightenment comes around the lunch or dining table as small drops of nebbiolo fall into large glasses as a procession of typical Piedmontese foods enters the spheres of food tourists’ minds.

Not all tastings were conducted over lunch/dinner and I made the exception when visiting the mountain at Barbaresco, the home of Angelo and Gaia Gaja.

We were also there to connect the dots between slinky Barbaresco and the more solid Barolo regional wines. Hmmm.

The morning was warm and hazy, Alba fogs and the morning collection of mist dusted the hillslopes.

The pre-lunch shimmer of this thin blue cloud over the patchwork of nebbiolo, barbera and dolcetto vineyards is a usual site. After then it vaporises.

Both Europe and this Langhe region remained in an unusual stretch of warm weather in early October.

The greens of mid-summer have gone and the vine leaves morph to duller colours, the early harvest 2011 vendemmia is in, vines rest, the sandy-white clay is turning to dust with the low humidity and drying conditions.

At Gaja all the harvest is in before October 4, winery floor freshly-washed and no longer smelling of grape juice, fermentations are ceasing, and grape skins are sitting in contact with their newly-formed wines to undergo the slowly cooling maceration process (just sit in contact with skin and seed for 20-30 days before separation at the press).

This is modern nebbiolo with more tender tannins but equivalent ageability to the great 1958 wines and the two decades afterwards.

The tank farms are quiet and one would hardly know that each shiny vessel is filled to capacity.

Sonia Franco leads our tour. She fixes on the original family subterranean barrel rooms (with progressive additions) which hold both large Slovenian (2-5000 litres) and barriques (225) of French allier style. At tastings though this oak is barely detectable.

Our visitors also share in Gaja’s contemporary celebration of Spanish ancestry amongst the life and events which led to the 150th year of business two years ago.

The posters say so much about this family who aimed for greatness in their winelands along the river Tanaro.

Never take the display down Angelo!

And connected with the relationship between great older bottles of Gaja and the British fine wine auctioneer Sothebys.

The Gaja Barbarescos DOCG 2008 (14.5%) and 2001 (14%): polarising tastes as 2008 is a ripe year with exuberant flavour, tastes of ripe tobacco which are easy to connect over, mouthfeel which rolls the savoury earth fruits with the ample acidity; 2001 is a vintage slowly unwinding, always showing backbone when I tasted in the past, never generous, taut, herbs, black fruits so not under-ripe; just a contrasting wine.

Gaia says ”2008 is our drinkable young Barbaresco. The summer was particularly dry and the flavour came easily. A beautiful vintage. It has perfume for aroma, the palate has layers, even soil character. The 2001 has transparent colour now, a colder year, mature but with a long tail of fruit, it is delicate”.

Gaia is gently expressing the soul of Barbaresco nebbiolo, its understated character, silkiness and therefore contrast with the same grape grown in Barolo when the texture becomes more emphatic. A discovery point for the touring tasters, particularly without food.

The Gaja Barolo-origin Conteisa 2007 (14.5%) and Sperss 1999(14%) are firstly fabulous single vineyard wines-from sites which speak of the character of nebbiolo, but the more sizeable wines, opposite to Barbaresco. Conteisa is being carried along by the product of global warming, so the fruit is expressed in every direction, roses, this brings about a lot more roundness on the palate, immediate acceptance. Sperss stands out like a beacon, power but maturing aromas bring out nebbiolo character, tar, tea, earth, drying chewy tannin mixed up with high complementary acidity.

Gaia says “Conteisa 2007 is a year for density of fruit, the expression is very apparent, then the palate gives softness. Firm wine but rounded from ripeness. For Sperss we like to think maturity comes 10-15 years from bottle date, so this wine is now just entering its maturing plateau, so it is now approachable”.

All that remains is how to conquer this high acid, high tannin, moderately light bodied, textural, savoury grape style that leaves enlightenment until the end of a visit to Gaja in Barbaresco.