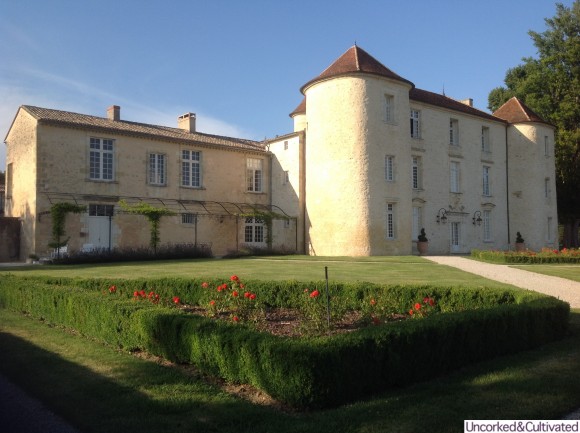 Jean-Emile Serisier set out from the Aquitane city of Bordeaux in 1850, then a very civilised place, to the wilds of Sydney in the Great Southern Land (Australia). One does not really know what was in his head at the time.

Fast forward 138 years later and great, great grandson Richard Serisier had completed the return to Bordeaux. Not exactly to the family firm of Serisier et Lafitte who were shipping agents directing all the Claret exports to the thirsty British drinkers from the Quai des Chartrons, but to a property in the Canton of Fronsac.

Richard did not set out to buy gold plated vineyards in Pauillac or Pomerol (millions of euros per hectare). He sought a derelict chateau with a lovely view, not over hundreds of rows of glistening-green vines but one across plane tree plantations down to the statuesque Dordogne River. The rebuilding period took four years (2004-2008) where Richard moved his family from Brisbane in Queensland to Chateau Cadillac-en-Fronsandais built © 1530 after the end of the Hundred Years War and the British departed.

Following the building restoration, it became a logical step for an investigation into the history of the property; and through the 1800s while Jean-Emile Serisier was planting vines around Dubbo in central western New South Wales, Chateau Cadillac-en-Fronsandais was a horse breeding facility, though vines have been grown around the property for the past four hundred years.

Since 2008 Richard has replanted the industry-expected merlot and cabernet sauvignon grafted vines on 9 hectares on the rich loamy terraces behind the Chateau, adding also some cabernet sauvignon and malbec to complete the historical Bordeaux mix.

First harvest was 2012 and this author is now the Queensland and New South Wales ambassador for two Domaine Serisier wines, a rose and a merlot red.